Analyzing the conversation during the US Election Day

Donald Trump has been elected 45th president of the United States of America and the surprising outcome has been reflected on the conversation on social media.

We recently released a simple tool called Tarsier that uses machine learning to analyze the conversation around the US elections. You can try it out Tarsier here and learn more about the tool here.

General insights about the Election Day

Although the tool isn't real time (it updates every 24 hours), Tarsier has already analyzed hundreds of thousands of tweets on November 8th during the election day where we can observe some interesting insights.

For example, starting on November 7th, people started talking more positive than negative about the candidates, something very rare in the last 4 months of campaign, with Trump having better sentiment than Clinton (something that has been happening for a while):

If you compare this to the general sentiment happening on Twitter 1 month ago, Trump has come a long way and actually improved a lot the sentiment around him:

If we analyze the most relevant keywords from the tweets made during the Election Day, we can see some interesting things. As an example, these are the keywords that appeared when people mentioned Donald Trump with a positive sentiment on Twitter: 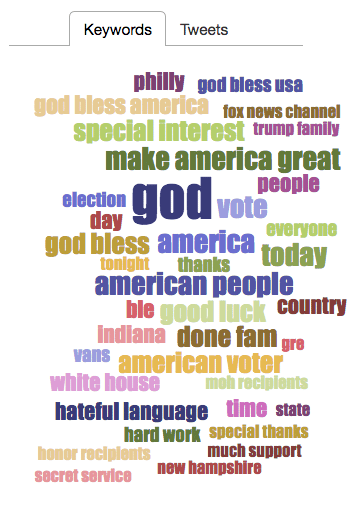 As you can see, most people mentioning Trump were wishing him good luck, talking about making America great again (as expected) and making references to God.

These are some examples of the positive tweets made yesterday about Trump: 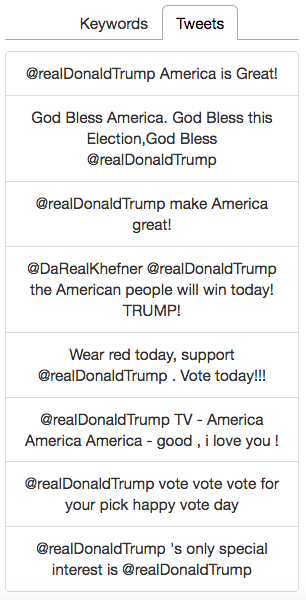 Although the machine learning makes some mistakes (sentiment analysis is really hard), it's a general overview to understand how people were tweeting about Trump with a positive sentiment.

In terms of negative tweets about Trump, we can see some interesting keywords by analyzing yesterday tweets, like people inciting to go and vote (to stop Trump from winning), people complaining by saying 'fuck' or 'shit' or 'comedy show' (as a reaction to the preliminary results), people complaining about the 'establishment politicians' and even people accusing the 'rigged system': 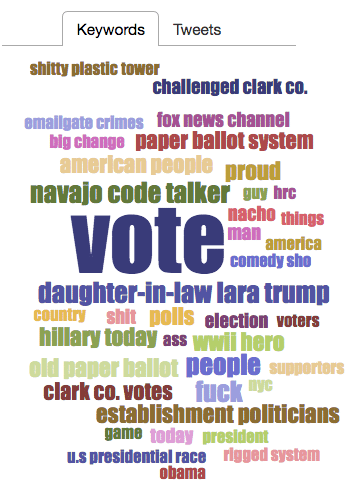 On the other hand, it's interesting to understand how people were talking about Hillary Clinton during the Election Day. Like Trump, when people were talking positive about Clinton, people were wishing her good luck. But also people were making references to the 'first female president' and 'making the right thing' and also asking people to go out and vote (again, an attempt to stop Trump from winning): 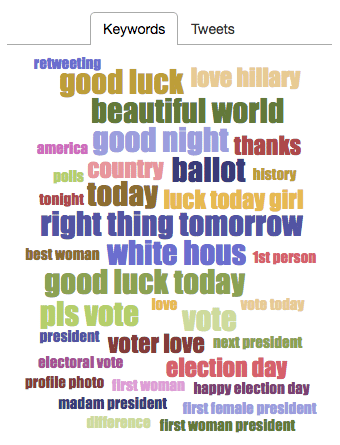 These are some of the positive tweets about Hillary Clinton made during the Election Day: 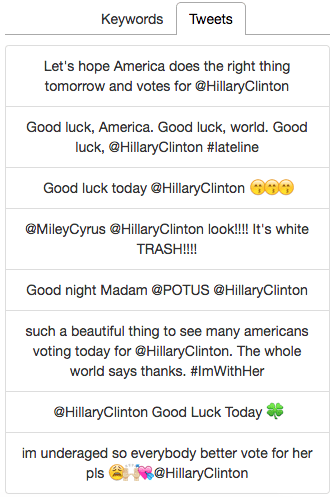 In contrast, people mentioning Hillary Clinton with a negative sentiment were talking about making a 'symbolic protest vote' (probably against the political establishment), people complaining about the pollsters, people talking about having a 'weird feeling' (maybe a hunch of what ended up happening), talking about corruption, insulting her and talking about the middle class: 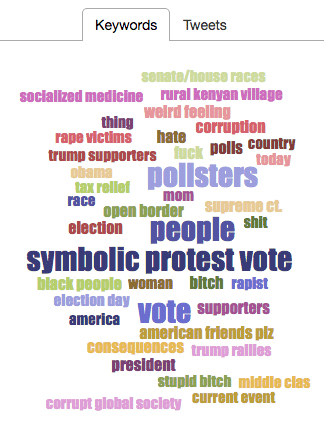 These are some examples of negative tweets detected by Tarsier: 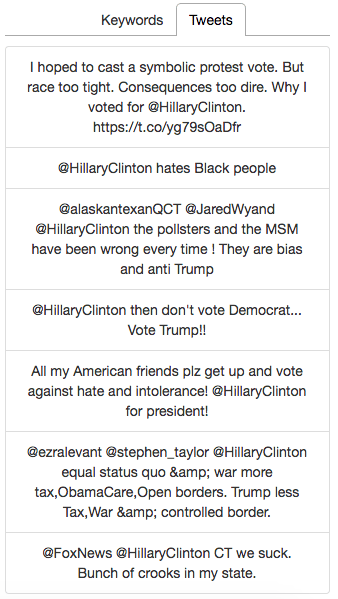 Again, some tweets like "All my American friends plz get up and vote against hate and intolerance! @HillaryClinton for president!" was detected as negative sentiment but in favor of Clinton. Sentiment analysis is hard, there's work to do to improve these cases, but still is a tool that can give us a general overview of what's happening.

Being such a historic moment, a tool like Tarsier can shed some light of what are some of the reactions and consequences of this result.

This year has proven to be a turbulent one; first the Brexit, then Colombian people voted to reject peace deal with the FARC and now Trump winning the US elections, a reflection of a massive shift in today's political landscape around the world.

It would be interesting to keep an eye on how the conversation evolves and check out Tarsier tomorrow in the morning (as we will have the analysis of today's tweets). At the end of the day, the elections are over but life goes on.

What Is Voice of Customer? How To Set Up Your Own VoC System

When customers’ expectations are higher than ever, companies need to keep a constant watch on the entire customer journey, and understand…

Power Up Your Ticket Management System with Machine Learning

Whether you regularly receive thousands or only just a handful of daily customer support tickets, how you handle ticket management can be…

Regular data analysis is, of course, important to every business. But the kinds of analyses you run and the kinds of techniques you use…